Importance of time and connections.

It has been a year since I logged into this starship database.... I mean blog.  A great year filled with visuals and learning and parenting and learning!!

In 1995 I worked on a story for the NY Times with the wonderful writer Seth Mydans.  I was given great access to local gang members from the Echo Park neighborhood of Los Angeles.  Gangs in LA were in the most active period in history.

I met, and photographed many of the gang members and kids who were attempting to get out of gangs.

Two boys I spent the most time with were a 15 year-old baby faced Echo Park newbie who called himself Dreamer.  His girlfriend, 17, was pregnant and I followed them for a couple months as they delivered a beautiful baby girl.

I also photographed a sweet 17 year-old boy named Alex,  AKA Lil' Wicked.  He had a two year old son with the same stunning blue-green eyes.

Photographing on black and white film, I followed these kids for several months but then as life moved on I never did more with the story.

Last week I had the pleasure of hanging with and catching up with Alex.  (Dreamer declined to meet with me) Sitting in the same alley where he lived back then and where I photographed him holding hands with his toddler, Alex caught me up on the past 20 years.  Stories of violence, prison, substance abuse were extreme.  He was put in prison about a year after I met him for the first time in 1995 and spent much of the time until 2009 in and out of prison.  He had not seen his son since the boy was 6.

After his last stay in prison in 2009, the man formally known as Wicked, decided to get his life together.  He got sober, got a job and when he felt he had finally grown up enough to be a role model to his son... he knocked on the door.

It was a great time hearing all of his stories and I plan on keeping in touch with him for more of this project with him and others that were in the gangs at the time.  The importance as a journalist of respecting your subject and building strong relationships based on mutual respect no matter what you think of their lot in life cannot be stressed enough. 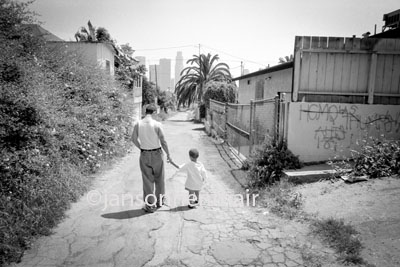 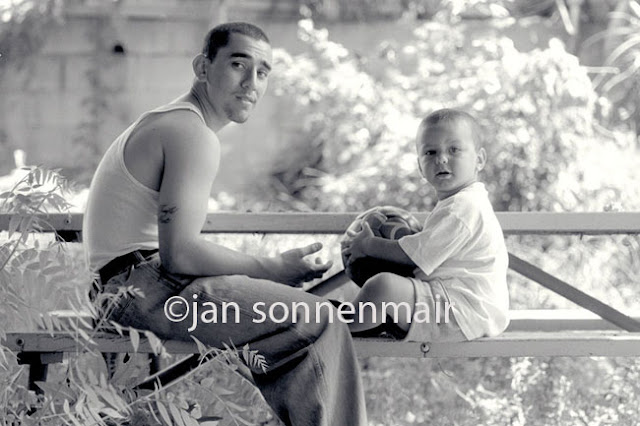 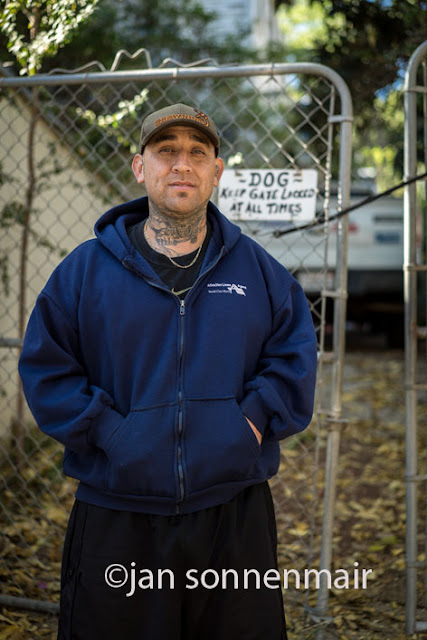 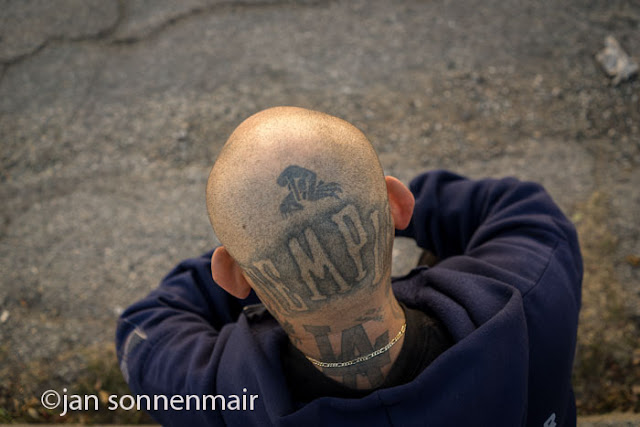 Devonte Hart and the officer 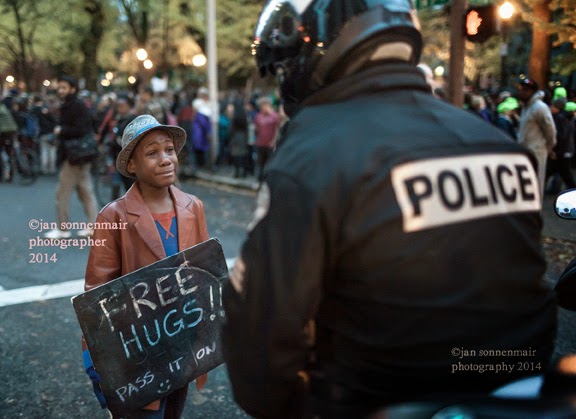 I don't do protests much anymore.  This rally, in Portland, seemed a place to be with my camera.  The country is divided and yelling out for justice.  So, on this cool, dark afternoon, I went to the Justice Center in downtown to see what was happening.  I stayed on the perimeter of the rally... shot a few iPhone photos and sent them off via instagram.   I was looking for some authentic moments... maybe not just the usual activists holding the usual signs.

I spotted this small boy with his siblings off to the side holding signs which offered hugs.  This was a very sweet thing to see but then I noticed the boy was overcome with tears.  I watched as a woman (soon I found out she was his mother) urged him thru the crowd and toward the police officers parked with their motorcycles on the street.  The boy, Devonte Hart, was overcome with tears and a few passersby took him up on his offer of hugs.  But he seemed focused on the officer and frightened.  The officer, Bret Barnum, finally called him over and asked him some questions... they were having a special moment.  Finally, Officer Barnum, asked Devonte why he was crying... Devonte said he was concerned about the level of police brutality towards young black kids.  The Officer said "I know, I'm sorry, I'm sorry"
Then they exchanged a hug.  Not one for the media cameras (even tho I was there as well as another photographer) but a heartfelt  moment that was a bright spot in this radical world looking for change.

But here in this image, I took, I believe is the real representation of where we are as a country.  A frightened, weeping,  young black man wanting some comfort and support  from a looming, scary officer.   It represents, at least to me, how extreme tension and division still lives in our American psyche.  How far we have to go.  How FAR we have to go.

The elevating of "THE HUG" photo to some sort of healing iconic place and the players in the photo (the boy, the cop and the photographer) to celebrity status only serves as a distraction or "happy ending" to the ongoing strife.  It does not allow us to truly look inside ourselves and force the change.

Some background on the boy...
Devonte's adoptive mother told me Devonte had lived a most horrible early life of drug houses, social services and abuse.  His story had been highlighted before on the Huffington post... Quoting them here:
"By the time he was four years old he had smoked, consumed alcohol, handled guns, been shot at and suffered severe abuse and neglect.
He knew only a handful of words, including fuck and shit, and he struggled to identify with the names of food, body parts and everyday objects. Devonte was a violent toddler and his health was weighed down by a heavy list of disabilities.

It was a life with little hope and a future that seemed over before it began."


In communicating with Devonte's parents, I see that he has no desire to be famous.  I never felt that when Devonte's mother urged him to talk to the officer it was for any purpose other than for Devonte to heal and walk thru his fear.  I have been touched, greatly,  by the solid focused values of this family but conversely have watched in sadness as a single photo has been used to make our collective selves feel better rather than make a change. 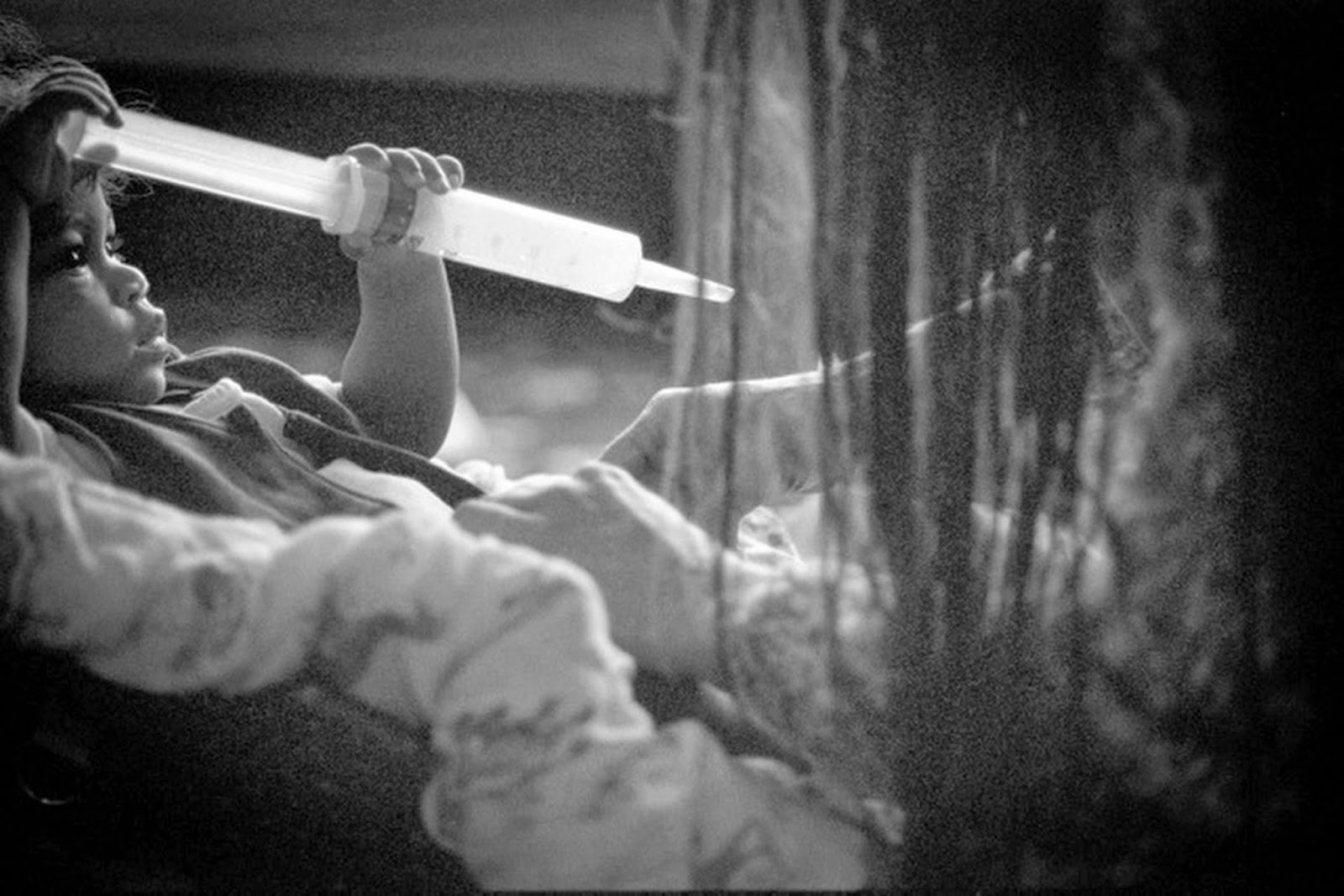 Black and White ---  It was that when we were younger.

I have been watching a bit of this black and white challenge on Facebook for the last week and have seen friends pulling out little gems, little pieces of their heart from that place where special things are locked inside.  The true soulfulness of B&W... film, fixer, grain.  Our lives when nothing mattered but moments and connections.  I am actually crying while writing because in my locked place will always be this little guy Patrick.  (Here helping his foster mother administer his meds.)  Ya see, Patrick had AIDS.  Back in the early 1990's  kids still suffered, in large numbers, from AIDS contracted at birth.

I had just moved back to California after leaving the Dallas Morning News and all I knew was that I loved telling deep stories and that I loved kids.  I was moved to action on this story by the way the media was portraying these beautiful victims... hiding them in shadow and shame.  I look at this little guys' lips and nose and remember the feel of his skin.  I was not about to let his life go by without others seeing his beauty.  Patrick was not defined by AIDS.  He was loved by everyone who was lucky enough to meet him... black and white.

I spent over 4 years photographing Patrick, his foster mom and brother, in the purist fashion of documentary photography I could muster.  One Nikon F4 and my Leica M6.  Rolls of TriX pushed to 1600.   Rushing to their sides as time after time germs made daily routine become life or death, up until Patrick's death on his 6th birthday.  I was lucky to have the story of Patrick be published in several magazines (even LIFE when it was still the best out there) and win a World Press Award where the rest of the world could see this little life that mattered.

Patrick was one of the first kids to be trial subjects for AIDS treatment protocol and I am sure that many of the drugs his body was subjected to have evolved into life saving and extending treatment for AIDS patients today...  black and white.

I might be making a long story longer here.  Pushing this simple challenge beyond what it's purpose is.  BUT we ALL know.  The tight family of photographers who document.  Whose nails once looked a bit brown from hours in the darkroom.  Our lives were touched by souls like Patrick as we recorded life on that delicate piece of film.  Black and White.  We had to go slower in those days, each frame important.  I shoot mostly digital images now and often shift them to black and white in my computer. Those images I shift out of color are usually ones which tell stories that have the soulful feel of real.

Thanks for the challenge AND the memories.